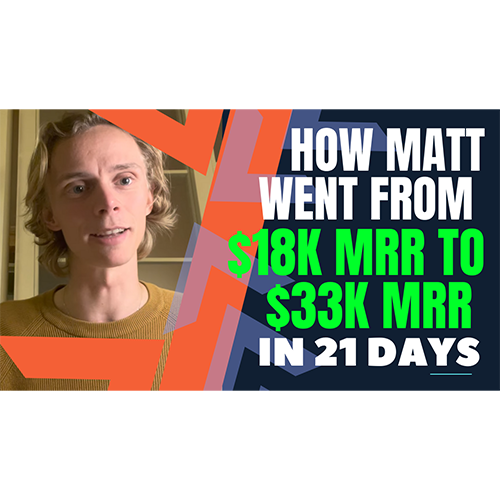 Matt Treece is the founder of Buzzcube. Buzzcube offers unlimited graphic design and web development. Before being introduced to Converisonly, business was growing but growing slowly for Buzzcube. Matt was doing all the sales, doing all the fulfillment, and trying to figure out lead generation. He was getting about two calls per week.

Matt has a background in digital marketing but couldn’t figure out a way to scale his company quickly. The biggest issue was that he didn’t have reliable and scaleable lead gen.

Conversionly was able to help Matt build a customized client acquisition system that predictably brought in appointments for Buzzcube. Matt says that he has had experience in the past with other programs and time after time he was let down. Most of them over-promise and under-delivered.

In this space people give such bad generic advice. But these guys have, every step of the way, given such great solid advice.

Matt said that he had paid a ton of people to help scale his business and most of them were just courses and he didn’t speak to any of the experts. He found it extremely valuable in being able to speak directly to Zach and Justin when he needed specific help.

Matt said that when you work with Conversionly it really feels like you are hiring a consulting firm that comes into your business and shows you exactly which levers to pull so that you can scale rapidly.

Literally within the first three weeks they helped me create a lead gen system for my company that is now pouring in 10 leads per day, and booking 5 calls every single day.

Within the first three weeks of getting started, Matt was able to add $15k MRR and has his calendar stacked with sales calls. And now is looking at growing the team and hiring closers. He is confident that he will be at $100k MRR within the next handful of months.